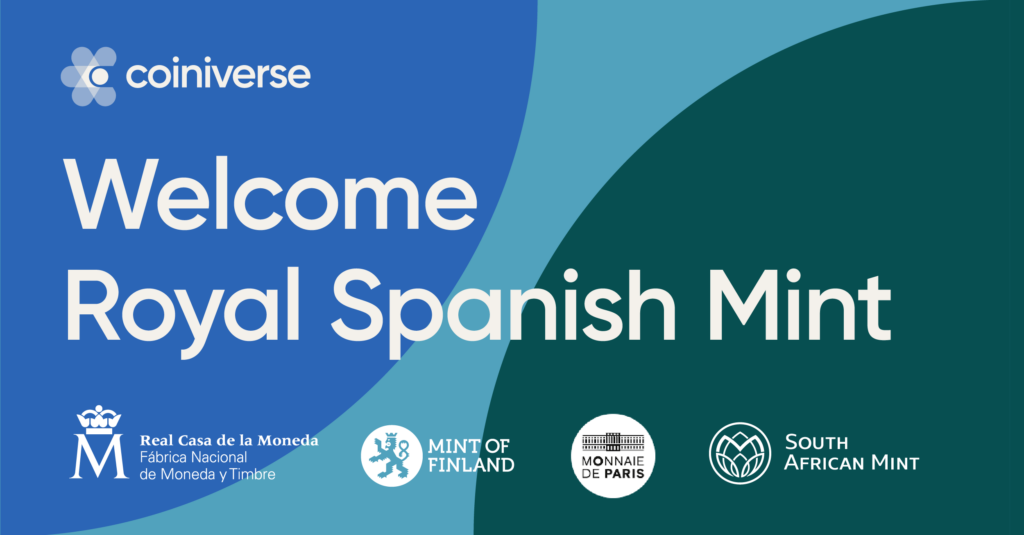 “With the incorporation of the FNMT to this initiative, we want to present our collector and commemorative coins so that everyone can enjoy through them our art, our history, and our unique country.” Says Gonzalo Moreno de Alborán, Collector Coins Manager from FNMT.

FNMT and Coiniverse come together to bring more stories and collectibles into the hands of the global coin collecting community.

“We welcome The Fábrica Nacional de Moneda y Timbre as a Coiniverse member mint. Together with FNMT, we are looking to delight the growing global coin collecting audience with high quality coin content and stories” says Mikko Sievänen, Head of Digital Development of Mint of Finland.

Global trend shows that the number of coin collectors, as they are known today, is decreasing. The future collectors are modern coin enthusiasts who want to unlock new digital collector experiences. Discussing with mints around the world, Coiniverse is seen as a good opportunity to reach younger generations and to build new business models. With Coiniverse the industry gets insight on what younger collectors want and how they behave. FNMT is the third Coiniverse mint member, after Monnaie de Paris and South African Mint joined earlier this year.

Download Coiniverse for free on iPhone and on Android.

If you are a mint interested in partnering up with Coiniverse. Please, do get in touch with us.

The Fábrica Nacional de Moneda y Timbre was created in 1893 with the merger of two mature organizations: the Casa de la Moneda (The Mint) and the Fábrica del Sello (The Stamp Factory). Since then, and under the common denominator of security, our scope of activity has not ceased to widen. In 1989 we started minting collector coins. In 1989 we minted our first series of collector coins. Today we play a key role in the global numismatic markets.

Mint of Finland provides manufacturing, coin lifecycle and consulting services related to coins. Mint of Finland is one of the leading coin exporters in the world. The company is owned by the Finnish state. Since 2016, Mint of Finland has been working on finding out what kind of impact digitalization will have on cash money and what kind of future there will be for the cash industry. Coiniverse is one of the company’s projects around digitalization in the coin industry. https://www.rahapaja.fi/en/